(Votes:118, Average:4.4)
Please share Your opinion and comments in the Facebook-comment box below the player! If the radio broadcast lags, or breaks, please send us a message on the Contact page! If the radio doesn't start at all, try and check the Troubleshooting page to find a solution! 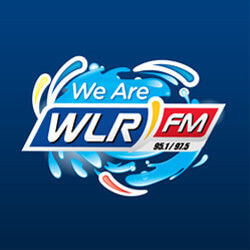 Listen to the online radio of WLR FM live, which launched officially in 1989, but also operated before as a pirate radio station for a decade. The radio is in the ownership of The Irish Times.
The broadcaster operates as a local commercial radio station which serves primarily the people of its home county as the most important information and music source. WLR FM is a multi-award winner radio station, for example it has won the "Local Station of the Year" title in 2012 at the PPI Radio Awards.
The station's playlist is built from the last 40 years’ best pop music, but also country and Irish music appear in specialist programmes. The traditional Irish culture appears not just in music, but in native language programmes too. As a local radio provides the air-time for debates about locally relevant politics, current affairs, community issues and every imaginable topics which could have importance are discussed in the talk shows.
The broadcaster makes the oversleeping impossible on weekdays with its morning show "The Big Breakfast Blaa" from 6am to 10am lead by Vinny and Aoibhin.

The popularity of the country and Irish music selection of the radio made the launch of a spin-off station necessary, so in 2018 the "Absolute Irish" sister station commenced broadcasting, You can launch it below the player!

FM104
Dermot Kennedy - Something To Someone

Eirewave
Nothing But Thieves - Sorry

Here’s how the new WLR FM studios look after major refurbishment
The brand-new look for WLR FM was unveiled this week after a major refurbishment and technical upgrade was made to the studios. The first two of six WLR studios are now in operation and began broadcasting this week. This is the first major refurbishment in a number of years and it will enhance WLR’s audio, video and digital offering...More >>
radiotoday.ie - 08.09.2022
The WLR Christmas Radio Appeal raises over €100,000
The WLR Christmas Radio Appeal has raised over €100,000 for the St Vincent De Paul in Waterford, Tramore and Dungarvan. Through a series of events over the month of December, WLR listeners came together to raise funds for those most in need in Waterford. Michael Byrne, WLR’s Operations Manager said: “The appeal is a massive undertaking for the station but worth all the time and effort...More >>
radiotoday.ie - 04.01.2022
Vinny and Aoibhin host their first WLR Big Breakfast Blaa
Vinny Bradley and Aoibhin Fallon go back a long way. It’s easy to tell they’re completely relaxed in each other’s company as they dissect their first morning on air together on WLR’s all new Big Breakfast Blaa. Vinny, originally from County Wexford but living in Waterford City for almost two decades, is well used to the early starts having moved from sister station Beat, where he was an integral part of Beat Breakfast for 15 years...More >>
radiotoday.ie - 31.08.2021
WLR’s Christmas Appeal raises over €90,000
This year’s Christmas Appeal at WLR has raised over €90,000 despite restrictions over activities due to the coronavirus. The Money raised will go directly to the SVP in Waterford so they can continue to help the people of Waterford City and County. The services provided not only include financial assistance for food, bills, rent, fuel, and electricity where necessary, but also, support for people in making a better life for themselves and their families. Events this year were difficult due to restrictions, but several virtual events took place including the ‘Wear Red Day’, the annual Santa run, a virtual swim, 12-dogs of Christmas...More >>
radiotoday.ie - 23.12.2020
Showtime returns to WLR FM with Wayne Brown
WLR FM is bringing back its Showtime show with music from the musicals every Sunday with Wayne Brown. Showtime, starting September 20th at 7pm, will feature songs from old favourites like ‘Les Misérables’, ’Chess’ and ‘Jesus Christ Superstar’ to the best up to date modern musicals such as ‘Dear Evan Hansen’, ’Come From Away’ and ‘Hamilton’. Plus – classic shows like ‘Oklahoma’, ‘Fiddler on The Roof’ and ‘My Fair Lady’ mixed with movie musicals like ‘Mamma Mia!’, ‘The Greatest Showman’ and ‘La La Land’. There’ll even be some Disney tunes and Movie Themes thrown in for good measure...More >>
radiotoday.ie - 10.09.2020
New News and Sport Editor at WLR FM
WLR FM has appointed Julie Smyth as its new News and Sports Editor. The Tramore woman began her career with the BBC and has recently taken over the position with station. Julie will be responsible for day to day management of the station’s news and sports output, implementing the station’s strategy, and identifying and training new talent. She will also be in charge of evolving the news and sport offering to maximise listenership growth in news and current affairs programming. Announcing the news this week the Managing Director of WLR FM, Des Whelan, said the company was delighted to announce the appointment...More >>
radiotoday.ie - 04.09.2020
WLR FM helps raise €16,000 for mental health charity
An event supported and driven by WLR FM in aid of mental health charity Suicide or Survive has raised €16,000. This year’s Mental Health and Suicide Awareness Cycle was due to take place on Easter Sunday, however the restrictions imposed by COVID-19 saw the organisers having to rethink their usual approach. Cycle organiser Liam Brazil joined forces with WLR FM to initiate an online cycle challenge, namely ‘Cycle for SOS’, whereby people could partake in a 20 km cycle from their homes, in keeping with the imposed travel restrictions. The event was supported and driven by WLR FM, and via social media platforms...More >>
radiotoday.ie - 25.08.2020
JNLR: 81% of the population listen to radio every day
The latest radio listening figures show 81% of the population are tuning in every day, which translates into weekday figures of 3.2 million listeners. More than half tune into their local or regional station and 43% listen to a national station. Among the younger, 15 to 34-year market, 71% listen daily. Gabrielle Cummins, Chairperson of the Choose Radio group says access to radio on smart devices is helping radio stay at the top of its game: “The growth in streaming services has revitalised radio advertising and reiterated its relevance to the listener. Access to radio is now...More >>
radiotoday.ie - 06.02.2020

Eirewave
Nothing But Thieves - Sorry

06:57WLR-IMRO LOCAL STATION OF THE YEAR.

06:49WLR-IMRO LOCAL STATION OF THE YEAR.

06:45PUMPED UP KICKS - FOSTER THE PEOPLE

06:40WLR-IMRO LOCAL STATION OF THE YEAR.

06:31WLR-IMRO LOCAL STATION OF THE YEAR.
Get older songs

00:00 - Overnight Music
06:00 - The Big Breakfast Blaa
Start your day with Vinny and Aoibhin on The Big Breakfast Blaa, who bring you plenty of on-air banter, laughter, great music, fantastic competitions, features and much, much more…
10:00 - Déise Today
The award-winning Déise Today is Waterford's most listened to radio show, with topics that are relevant, diverse, sometimes sad, sometimes funny, and always compelling.
12:00 - The Lunchbox
Cruise your way through the afternoon with Geoff Harris whose cheery tones and energy will have you sailing blissfully through that mid-day slump on The Lunchbox!
15:00 - The Spin Home
On The Spin Home, let Ollie fill you in on the happenings of the day and also entertain you with interesting features, competitions and great music to take your mind off the gridlock!
18:00 - On The Ball
Join Gavin Whelan every Monday evening and Nigel Kelly Saturday afternooon for the very latest on loc...
19:00 - The Shift
Ray C knows his music inside out, and it's reflected in his eclectic mix on The Shift. He combines the best of classic songs with brand new music - the perfect listening backdrop to help you chill out after a long day.
21:00 - The Late Show
Whether it’s been a tough day at the office, a busy day of getting jobs done at home or you’re working late, John O’Shea has the perfect soundtrack to your weeknight.