(Votes:21, Average:4.5)
Please share Your opinion and comments in the Facebook-comment box below the player! If the radio broadcast lags, or breaks, please send us a message on the Contact page! If the radio doesn't start at all, try and check the Troubleshooting page to find a solution! 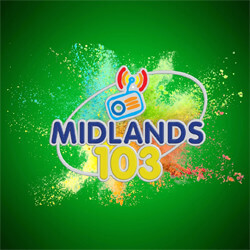 Listen to the online radio of Midlands 103 live, which commenced broadcasting in 1990 as Midlands Radio 3 and in 2003 relaunched with its current name. The station operates as a commercial local radio station from its Tullamore studios, and also has some additional studios in Athlone and Mullingar. The radio is in the ownership of Tindle Radio Group, and has analogue availability in counties Laois, Offaly and Westmeath.
The broadcaster's talk-emphasized programme structure brings the most diverse topics from local and national-international level under the scope. Midlands 103 news brings current affairs, sports and life. In subject specialist programmes, business, agriculture, social media, arts and entertainment topics are analyzed further, and also documentaries as well as behind the scene reports highlight the background.
The station's playlist selects from the last 40 years’ popular music, and expands in genre specific music programmes, which line up Irish and American country music and even old and new Irish traditional music. Irish emerging talents are supported by the radio as its Irish music programme “The Vibe”, led by Paul Downey offers air time to their music.
Midlands 103’s mornings are in Ann-Marie Kelly’s award winner hands - with two Gold IMRO Radio awards in 2018 - on weekdays from 6:30am to 9am. One of the Gold prizes was awarded to Ann-Marie in “Specialist Music Broadcaster” category, which skill of her pervades the morning show, and also can be enjoyed on Friday from 10pm to midnight in “The Roadhouse Café”. The other Gold prize of Ann-Marie arrived in “Magazine Programme” category for “The Open Door with Ann-Marie Kelly” documentary programme, which can be followed on Monday from 7pm to 8pm.

MidWest Radio 96.1 FM
Frances Black - When You Say Nothing At All

FM104
Freya Ridings - Lost Without You

Downtown Radio
Sza and Justin Timberlake - The Other Side

05:40Jona Lewie - You'll Always Find Me In The Kitchen At Parties