(Votes:182, Average:4.3)
Please share Your opinion and comments in the Facebook-comment box below the player! If the radio broadcast lags, or breaks, please send us a message on the Contact page! If the radio doesn't start at all, try and check the Troubleshooting page to find a solution! 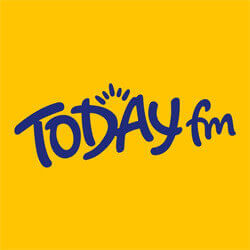 Listen to the online radio of Today FM live, which started its broadcast in 1997, in its Dublin studios, and works as a nationally distributed commercial radio station. The radio is in the ownership of Bauer Media Audio Ireland.
The broadcaster is one of the most popular radios in Ireland thanks to its vivacious attitude in its talk-shows, and to its carefully selected music line-up. The playlist is built mainly from pop music, but almost every type of music can appear in its colourful palette. Besides the talk-shows and music, the station keeps its listeners updated with the latest Ireland and World news, sports news and weather reports.
The radio has three digitally distributed sister stations, "80s" and "90s" as decade oriented sisters, and "XM" which broadcasts indie music primarily.
The station has morning shows on every day of the week, on weekdays from 7am to 9am the "Ian Dempsey Breakfast Show" dynamizes the air, on Saturday from 8am to 11am and on Sunday from 9am to 12am the "Weekend Breakfast with Alison Curtis" tunes up the mood. Additionally the weekdays are in the favour of the early birds, because "Early Breakfast with Pamela Joyce" from 5am to 7am sharpens the blurry dawns. One of the most popular shows in the schedule is the "Dermot and Dave" on weekdays from 9am to 12am.

The radio's sister stations are available below the player!

Dublin's Q102
Bryan Adams - Everything I Do

FM104
Dermot Kennedy - Something To Someone

Christmas FM
Rod Stewart - Got My Love to Keep Me Warm

Eirewave
Muse - Will Of The People

Ray Foley returns to Today FM to host weekday afternoons
Ray Foley is leaving Cork’s Red FM to replace Mairead Ronan on afternoons at Today FM. Other changes just announced include Pamela Joyce getting her own lunchtime show and Fergal D’Arcy leaving in the coming weeks. The refreshed schedule will also see Early Breakfast presenter Paula MacSweeney take up a new slot in the evenings and Ian Dempsey add an extra hour to his morning show...More >>
radiotoday.ie - 11.01.2022
Lunchtime presenter Mairead Ronan to leave Today FM
Today FM lunchtime presenter Mairead Ronan has announced that she is stepping away from her radio show to spend more time with her young family. Sharing the news with her lunchtime listeners earlier this afternoon (Friday) Mairead said: “I have made an exciting but also a bittersweet decision I want to share. I’ve decided to step away from my lovely radio show...More >>
radiotoday.ie - 12.11.2021
Phil Cawley leaves Today FM’s weekend schedule
Long-serving Today FM presenter Phil Cawley has left the station after almost 25 years. He hosted his last show over the weekend, saying it was time to focus on other things in his life. Phil also works on South East Radio hosting Drive, following his daily show on Today FM coming to an end...More >>
radiotoday.ie - 29.10.2021
RTÉ takes home two Golds at the New York Festivals
RTÉ has been honoured with two gold trophies, seven silver, four bronze awards, and 11 finalist certificates at the New York Festivals. Only four of the 40 awards taken by Irish stations went to independents – with Newstalk winning three for Social Issues (Letter from Midwinter), Human Rights (Do Not Disturb) and History (Angels of Mercy), and Today FM for the Lennon 40 Years On documentary...More >>
radiotoday.ie - 13.10.2021
The big winners list for the IMRO Radio Awards 2021
Bauer’s radio stations in Ireland have won a total of 41 awards including 13 Gold across Newstalk, Today FM, 98FM and SPIN. The IMRO awards included Music Station of the Year for SPIN 1038, Current Affairs Programme for The Pat Kenny Show on Newstalk and Entertainment Inserts for Gift Grub on Today FM’s Ian Dempsey Breakfast Show...More >>
radiotoday.ie - 04.10.2021
Fergal D’Arcy marks 40 years of live music at Slane Castle
Today FM’s Fergal D’Arcy will host a special live broadcast from Slane Castle to mark the 40-year anniversary of live music at the venue. On this day 40 years ago, Thin Lizzy, supported by U2, took to the stage to headline the first-ever concert at Slane Castle. Spanning four decades with Lord Henry Mount Charles (and later his son Alex) at the helm, Slane Castle has welcomed some of the world’s biggest rock stars including...More >>
radiotoday.ie - 16.08.2021
Today FM rebrands with new jingles from Wisebuddah
There’s a new sound on Today FM this week as the Bauer service introduces a new jingle package. It includes a new four-note sonic logo plus information beds, and reflects the music played by the station. Alongside the new Wisebuddah package the station is broadcasting branding resources from across the family of Wisebuddah music companies; with imaging tools from IMGR Hot AC and library music from No Sheet Music...More >>
radiotoday.ie - 02.07.2021
Ian Dempsey personally delivers brand new car to listener
The Ian Dempsey Breakfast Show gave away a brand-new car worth €29,000 to one lucky listener and Ian delivered the car personally after his show on Today FM. Parents of three, Kevin Bolton and his wife from Dublin received the prize, a Renault Zoe E-tech 100% Electric, at their house after an on-air competition came to an end. Over a two-week period, thousands of people around Ireland entered to win the brand-new electric car. A total...More >>
radiotoday.ie - 28.06.2021
Today FM asks Whose Show Is It Anyway
Today FM is introducing a new show to its weekend line-up with ga different guest presenter each week. ‘Whose Show is it Anyway’ will give listeners the chance to hear a range of surprise guests every Sunday from 12-1PM. From musicians to comedians and more, each week, Today FM will reveal a different celebrity guest who will take control of the station for one hour and present their very own show. Kicking off the series, this Sunday, 25th April, will Irish musician Gavin James...More >>
radiotoday.ie - 24.04.2021

Christmas FM
Rod Stewart - Got My Love to Keep Me Warm

Eirewave
Muse - Will Of The People