(Votes:35, Average:4.6)
Please share Your opinion and comments in the Facebook-comment box below the player! If the radio broadcast lags, or breaks, please send us a message on the Contact page! If the radio doesn't start at all, try and check the Troubleshooting page to find a solution! 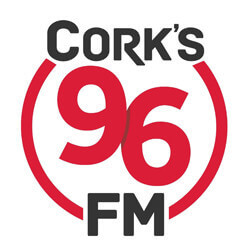 Listen to the online radio of Cork’s 96FM live, which started its broadcast in 1989 in its Cork studios, and operates as a local radio station for County Cork since 2000, when its analogue broadcast area had been extended to the whole county. The station is in the ownership of Wireless Group.
The broadcaster primarily serves Cork city and its home county by its locally relevant news, sports, travel and weather reports, but also national and international news and sports take place in the hourly recurring news bulletins. Several talk-shows fill the radio schedule, in which every topic could have been debated, and also the listeners can have their say in the phone-ins, like the award winning talkshow The Opinion Line with PJ Coogan on weekdays from 9am to 12pm.
The station's playlist has a very diverse structure, because generally pop music is aired through the day with the biggest hits of the 90’s, 00’s, 10's and the present decade’s, but also alternative styles appear in some specialized programmes, this way oldies and Irish music, old skool, dance and even a bonus decade, the 80s vary the musical palette.
The radio relentlessly searches for new Irish bands and talents and gives national exposure to them through the radio and its social media network once per month.
Corks 96FM refreshes the weekday mornings of the county with "KC & Ross in the Morning" from 6am to 9am led by Keith Cunningham and Ross Browne, and the Saturday mornings are started with "Weekend Breakfast with Mark Malone".

You can select the sister stations "Hit Mix" and "The Fit Mix", and Wireless Group's UK sportsradio talkSPORT below the player!

Shannonside 104 FM
Gabrielle - Out Of Reach

Cork's 96FM
Pink - Just Give Me A Reason

Live 95
Calum Scott - Where Are You Now

Eirewave
Amy Winehouse - Back To Black

Cork’s 96FM Giving for Living Radiothon 2022 raises €384,000
The fourteenth annual Cork’s 96FM’s Giving for Living Radiothon has ended with a total of €383,973.68 bringing the cumulative raised so far by Radiothons run by the Wireless Group station to almost €5.8 million. Money raised this year is to support Cancer Services in Cork provided through the five local charity partners: Mercy Hospital Foundation; CUH Charity; Marymount Hospice; ARC Cancer Support House and Breakthrough Cancer Research...More >>
radiotoday.ie - 30.05.2022
Schedule changes at Cork’s 96FM and C103
A number of changes to the programme schedules at Cork’s 96FM and C103 have been announced for 2021. Ken Tobin will move from the 12noon to 4pm slot on Cork’s 96FM to take over Cork’s More Music Breakfast on C103. He replaces Simon Murdoch who will replace Ken on Cork’s 96FM. Ken is 96FM’s longest serving presenter in the same time slot, whilst Simon cut his teeth on 96FM as a weekend presenter before getting a daily show on iRadio. He joined C103 a couple of years ago to present Cork’s More Music Breakfast. Both will start their new roles on 04th January 2021. Ken Tobin says “I’m absolutely delighted to be given the opportunity to host the breakfast show on C103 and work with my friends there...More >>
radiotoday.ie - 21.12.2020
Cork’s Christmas radio station returns for 2020
Cork’s dedicated seasonal radio station is back for 2020 as Cork’s 96Mas plays non-stop Christmas hits between now and the end of December. This is the third year that the seasonal station has run and will be available to listen via the Cork’s 96FM smartphone app and website; the TuneIn radio app as well as via smart speakers. Cork’s 96FM & C103 Local Content Controller, Brendan O’Driscoll tells RadioToday: “Christmas is a magical time of the year and Cork’s 96Mas will enhance that in Cork. “While our normal 96FM and C103 services will play a sprinkling of Christmas songs during December, we recognise that some people like to hear more. So we hope to hear Cork’s 96Mas being played in homes; businesses and cars across Cork City and County over the festive period.” ...More >>
radiotoday.ie - 10.11.2020
New Editor for The Opinion Line at Cork’s 96FM
Cork’s 96FM has appointed Terry Brennan as the new Editor of its daily Opinion Line programme. He replaces Deirdre O’Shaughnessy who leaves the station in mid-October to take up a new role with The Irish Examiner. Terry was most recently Head of News and Programmes for UTV in Belfast and has previously held similar positions in ITV’s Anglia and Westcountry regions. In his new role, Terry will report to Local Content Controller for Cork’s 96FM and C103, Brendan O’Driscoll. Terry said: “I am very excited to be joining such a talented team at Cork’s 96FM. The Opinion Line is a hugely respected and trusted brand in Cork and it is a privilege to be taking on the role of Editor.” ...More >>
radiotoday.ie - 29.09.2020
96FM and C103 raise over €77k for Frontline Legends
An appeal to support Cork’s Frontline Legends by local radio stations, 96FM and C103, has raised over €77,000. The one-day event took place on Good Friday between 0700 and 2300. Both brands encouraged listeners to make a one-off donation of €19 via their websites or by telephone. The Wireless-owned radio stations teamed up with the charities attached to the two biggest hospitals in Cork where the majority of confirmed cases locally will be treated: Cork University Hospital and The Mercy University Hospital...More >>
radiotoday.ie - 15.04.2020
96FM and C103 support local medical staff
Cork radio stations 96FM and C103 are supporting local medical staff on the frontline in the battle against COVID-19. The Wireless-owned stations have teamed up with the charities attached to the two biggest hospitals in Cork where the majority of confirmed cases in Cork will be treated: Cork University Hospital and The Mercy University Hospital. This Good Friday, both stations will be encouraging listeners to make a one-off donation of €19 via the stations websites or by telephone...More >>
radiotoday.ie - 06.04.2020