(Votes:43, Average:4.6)
If the online broadcast of Beat 102 103 doesn't start, or lags, please contact us on the Contact page, or try to find the error on the Troubleshooting page. 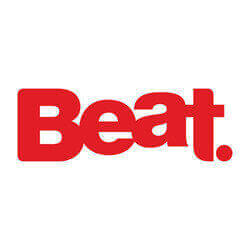 Listen to the online radio of Beat 102 103 live, the broadcast was launched in 2003, and operates as a regional commercial radio station in its Waterford studios, covering South East Ireland. The station's majority owner is The Irish Times.
Beat FM is the biggest radio station in South East Ireland, and in its broadcasting area has the biggest audience in its target age group, which is the 15-35 young adult category, beating the big national players of Ireland’s radio broadcasters.
The unstoppable dynamic of Beat FM in keeping the the air under its control comes from the mainly music dominated programme structure. The playlist is a colorful selection of the latest-hottest pop hits supplemented with some alternative, when at night anthems and old-skool styles take over the waves. The broadcaster also dignifies the nation, because on Sunday from 8am to 10 and between 10pm and midnight "Hit 30 Na Héireann" with Louise Cantillon, the station's Irish language chart music programme helps to keep the native Irish language alive.
In the irresistible music flood also the informing takes place, so news bulletins with sports-traffic-travel-weather packages are aired regularly, and a lot of vivacious talk-shows diversify the schedule.
Beat’s morning show, the "Beat Breakfast" makes the sleep-over impossible on weekdays from 7am to 10am with Niall Power and Shonagh Lyons. On Saturday, the "Weekend Beat Breakfast" led by Shonagh Lyons gives the starting momentum of the weekend from 7am to 11am. On Sunday mornings, the earlier mentioned "Hit 30 Na Héireann" with Louise Cantillon wakes the listeners from 8am to 10am.

The radio's sister station Noughty Beats can be listened to by selecting it below the player!

C103
Ronan Keating - When You Say Nothing At All

Joleen Murphy appointed News and Sports Editor at Beat 102-103
Joleen Murphy has been appointed as Beat 102-103’s newest News and Sports Editor. Having previously worked as a senior journalist in the station’s newsroom, the Wexford native assumed the editorial role on December 23rd 2022...More >>
radiotoday.ie - 28.12.2022
Beat 102 103 launches Solas School for Life campaign
Beat 102 103 has launched the Solas School for Life campaign for Schools in the South East to coincide with the Solas Cancer Support Centres Run and Walk for Life 2022. The station is diversifying its support efforts by encouraging primary and secondary schools across the area to #GoOrangeForSolas...More >>
radiotoday.ie - 02.09.2022
Carlow journalist Dayna Kearney is joining Beat 102-103
Beat 102-103 has hired Carlow journalist Dayna Kearney to its news team as digital and broadcast journalist. Before joining Beat, Dayna completed Beat 102-103’s Broadcast Course in conjunction with SETU and worked as the Carlow IT Student’s Union communications officer...More >>
radiotoday.ie - 05.06.2022
Listener finds runaway Beat presenters Niall Power and Darren Rice
A mother from Carlow has won €2,000 after she tracked down runaway Beat presenters Niall Power and Darren Rice in the Marble City. It comes following a three-day escapade during Beat’s On The Run competition. Ciara Griffin finally caught up with the elusive Beat jocks at The Parade in Kilkenny City on Wednesday afternoon in a culmination to what’s been one of the largest promotions in Beat’s nineteen-year history...More >>
radiotoday.ie - 14.05.2022
Beat hires three new local journalists to join its newsteam
Beat 102-103 has hired three new local journalists to join its newsteam. Limerick-born, New Ross-based sports reporter Shaun Connolly is new to the Beat team, while news journalists Joleen Murphy and Jan Stafford return to Beat after a number of years with other local and national news outlets...More >>
radiotoday.ie - 11.05.2022
Beat Breakfast hosts launch The Afters Podcast with Niall & Sho
Beat 102-103 has launched The Afters, a daily podcast hosted by breakfast show presenters Niall Power and Shonagh Lyons. The podcast, aimed at listeners who can’t get enough of Beat Breakfast, says it provides an intimate and risqué window into the thoughts of the presenters, serving up all the craic of the newly reformatted breakfast show with some added kick...More >>
radiotoday.ie - 28.03.2022
Cillian Doyle is taking over The Takeover on Beat 102-103
Cillian Doyle is taking over The Takeover on Beat 102-103. Carlow-native Cillian will be a familiar voice to Beat listeners, having plied his trade as a news & sports broadcaster over the last eighteen months. A lifelong Beat fan, the former Bagenalstown Presentation de la Salle student returns to the same show he completed his LCVP experience on in 2015...More >>
radiotoday.ie - 14.03.2022
Listener wins €3,000 in Beat’s 3 Grand Trio competition
A listener from Wexford has won €3,000 prize money on Beat following a two week high profile promotion. Carolyn O’Donoghue from New Ross, County Wexford has bagged the cash after winning Beat’s 3 Grand Trio competition live on Beat Drive with Darren Rice. The promotion, in partnership with Wexford and Enniscorthy Credit Unions, saw tens of thousands of Beat followers enter over the last two weeks...More >>
radiotoday.ie - 01.02.2022
Here’s what’s on Beat 102-103 over the Christmas period
Throughout Christmas, Beat 102-103 will be doing its very best to put a positive spin on the rollercoaster year that was with numerous festive shows. Here’s a taster of what’s to come: On Christmas Eve, Niall and Sho will have a special Beat Breakfast promised to be filled with festive fun. The show will see the grand finale of Beat’s Holiday Haul competition with City Square Shopping Centre...More >>
radiotoday.ie - 22.12.2021

00:00 - The Sunday Grill Replay
Another chance to catch the best of the weekend's Sunday Grill interviews.
01:00 - The Beat Goes On
Your Music Now for the night owls!
07:00 - Beat Breakfast
Beat Breakfast is the South East's biggest breakfast show! Join Niall & Sho each morning from 7am and wake up with your mates! They'll test you with Dean's Deck, bring you Good News/Bad News and the famous Daily Dilemma is on each morning just after 8.30. To get in touch with the show, email talk@beat102103.com
10:00 - Beat at Work AM
Beat at Work with Dave Cronin is the only way to get through your morning at work. Let’s face it…. all of the other stations are waffling. Our promise is simple…. more music across the workday than any other radio station. Sho pops in to Give You The Goss each morning, and there's a chance to get a little nostalgic with the Noughty Hit Mix….. it will be lunchtime before you know it! Dave Cronin is one of Ireland’s most recognisable young voices as the voice of Spotify Ireland and Virgin Media.
13:00 - Beat’s Big Lunch
Beat’s Big Lunch is one hour of your requested tunes to get you through the lunch hour! You can request your favourite song by texting or WhatsApping 085-1029103, tweeting @beat102103, or snapping us on “BeatTakeover”.
14:00 - Beat At Work PM
Beat At Work is the show that helps you through the last few hours of your working day. Whether you’re in the car collecting the kids from school or in the office, you can expect great tunes, showbiz updates, and loads of craic!
16:00 - Beat Drive
Beat Drive is the most listened to music show in the South East. Darren Rice promises to get you home in the easiest way possible… he bangs out as many songs as he can every hour! He also has a chance to win cash on Cha-Radio, your need-to-know travel news, and great chances to win every day. The hassle-free way home! For the latest clues and wrong answers on Cha-Radio, click here! Darren Rice is a nine-time nominated presenter at the IMRO Radio Awards. In 2018, he took the bronze award in the Radio DJ category. Darren can also be heard on Saturday nights with the best in house and techno on the Saturday Selection from 10pm.
19:00 - Top 7@7
The soundtrack to your weeknights, Megan and Kirsten switch on the mic from 7 pm Monday to Thursday. You choose who deserves to be in the Top 7 at 7 each evening via text/WhatsApp on 0851029103. Send in the name of your favourite song of the moment and Cillian will tally them up and count down the biggest songs from 7 pm. The Takeover is brought to you by SETU.
19:30 - The Takeover
Join Megan & Kirsten each weekday evening for the biggest hits on the planet! They'll keep you updated on the latest goss, bring you the Noughty Threesome at 9 and the best Chilled Beats at 11!
23:35 - Beat Breakfast Replay
Not an early bird? Don't worry - there's another chance each day to catch up on the craic with Niall & Sho!