(Votes:182, Average:4.2)
If the online broadcast of Galway Bay FM doesn't start, or lags, please contact us on the Contact page, or try to find the error on the Troubleshooting page. 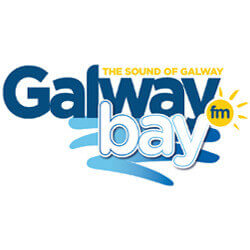 Now playing:
ON THE MOVE with Barbara Nic Dhonnacha

Listen to the online radio of Galway Bay FM live, which started its broadcast in 1989 as "Radio West". Radio West was the first legally operating local radio station in the county, in 1993 changed its name to its current form. The radio is in the ownership of Galway Bay FM Ltd.
The broadcaster as the number one local station of the county serves the people on analogue availability all over the county by several FM transmitters, and by its unrestricted digital distribution through the internet.
The radio smartly balances the music and talk ratio in its programme structure. Music lovers get their dose of tunes as well as the thought-hungry listeners get their verbal supply. The station's playlist generally brings pop music from the last 3 decades with the current hits, but in special decade oriented programmes also the 80s, and even the 50s and 60s are aired. Additionally in genre specialized programmes Irish country and American Country, moreover traditional Irish music lift the musical palette’s saturation. The traditional Irish perspective comes under the scope not just by the music, but the radio also broadcasts some native Irish language programmes.
The broadcaster shoots hourly news bulletins with local and international news and sports, travel and weather forecasts, and the news take place also in some particular programmes, when the local, national and international affairs are debated, and in-depth analyses broadens the viewpoint. The other extensively investigated topic is the sports as especially sports related programmes discuss passionately the sports events of the county, besides Ireland’s and the world’s, through commentaries, expert-reviews and analyses.
The radio wakes up its listeners, and energizes the weekday mornings with "Mollie in the Morning" from 6:30am to 9am.

MidWest Radio 96.1 FM
Doobie Brothers, The - Listen To The Music

Kick Covid Country Radio
Chad Brock - 'Til I Fell for You

Midlands 103
Meghan Trainor - Made You Look

Live 95
Tears For Fears - Everybody Wants To Rule The World

00:00 - Non Stop Hits and Classics
Galway Bay FM playing you the best overnight music you’ll anywhere on the radio.
06:30 - Mollie in the Morning
Mollie’s positive energy and witty personality will ensure you start the day the right way.
09:00 - Galway Talks with Keith Finnegan
Join Keith Finnegan every weekday for your current affairs. For all your information on news and events relevant to Galway plus much more. Play your part by sending us your thoughts and comments.
12:00 - The Live Wire with Ronan Lardner
A lively, music-driven show with an entertaining mix of music from the 80's to current hits, together with local news, sport and features. The show is full of high energy and Ronan's own sense of fun and entertainment.
15:00 - ON THE MOVE with Barbara Nic Dhonnacha
Barbara Nic Dhonnacha is a national award-winning radio presenter who loves music and all things music-related. The show is packed with fun features like “Barbara’s Brain Box” and the “Secret Sound of Galway”.
17:00 - FYI Galway
This pacy award-winning hour-long show presented by Galway Bay FM’s experienced news and sports teams brings you the day’s top local, national, and international stories with in-depth analysis.
19:00 - TRAD ON THE BAY with Máirín Fahy
Featuring all that is best and upcoming in the traditional music scene in Galway and beyond, Máirin Fahy will be inviting very special guests in for a chat, a catch up with each artist and maybe even a session of live music where Máirín could also join in and play along.
20:00 - OVER THE LINE
Over the Line is our IMRO award-winning sports show – up to the minute results, top analysis and sideline interviews delivered straight to your device.
22:00 - THE NIGHTFLY with Donal Mahon
The Nightfly with Donal Mahon – where day meets night across Galway Bay. Donal Mahon presents ‘The Nightfly’ a proper late night radio show that delivers a perfect combination of chat and features to the midnight hour with a playlist of soothing sweet music to recalibrate your mood.