(Votes:187, Average:4.4)
If the online broadcast of RTÉ Gold doesn't start, or lags, please contact us on the Contact page, or try to find the error on the Troubleshooting page. 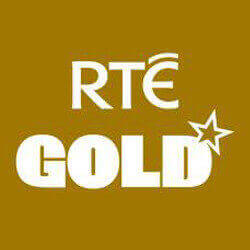 Listen to the online radio of RTÉ Gold live, which officially launced in 2008 together with RTÉ’s other only digitally distributed sister stations, in the ownership of Raidió Teilifís Éireann which is Ireland’s National Public Service Broadcaster.
RTÉ Gold is the greatest hits responsible station in RTÉ’s radio fleet, however it gives a little more than the general Greatest Hits radios, because its time-span is not restricted to the common greatest hits radio’s 70s and 80s selection, but goes further back and forward in time. This way the radio streches its musical perspective to 6 decades, so 50s, 60s, 70s, 80s, 90s and even the 00s are broadcasted. At first glance it could be strange, that we speak about the greatest hits of the 90s and 00s, but as time passes, the best songs of these decades’ have to be marked as "greatest hits" for the next generations. Whether the broadcaster will be right or not in this endeavor, we don’t know yet, but it is sure that the station undertakes this mission enthusiastically, and in the future we can decide if it was successful or not.
The radio gilds the weekday mornings from Monday to Thursday with 6 decades’ best pop music under the careful supervison of Will Leahy from 7am to 10am in "Gold Breakfast with Will Leahy", and on Friday with the "Gold Breakfast with Al Dunne", which is followed by the special selection of Rick Oshea from 10am to 13pm on weekdays.

RTÉ Gold slogan: “The Greatest Hits of All Time”

The broadcast is available only on the digital ways like DigitalTV, and as internet radio on RTÉ Radio player - we recommend the online radio stream.
DigitalTV: Virgin Media - Channel 941, Saorview - Channel 208
Your favourite radios
RTÉ Radio 1
Liveline

Clare FM
Shane Codd - Get Out My Head

Spirit Radio
LOVE ME LIKE I AM - FOR KING+COUNTRY, JORDIN SPARKS

Eirewave
The Kooks - Shine On

DAB digital radio broadcasting ends in Ireland
Today marks the end of DAB digital radio transmissions in Ireland as RTÉ switches off its services on the platform. The broadcaster originally announced in 2019 it would also shut down the stations using DAB as their main outlet, but made a U-turn earlier this month. Now, RTÉ Gold, RTÉ 2XM, RTÉ Radio 1 Extra, RTÉ Pulse, and RTÉjr Radio continue online only, offering hope that they may one day return to DAB...More >>
radiotoday.ie - 31.03.2021
RTE digital radio services to continue online
RTÉ is ending transmissions on DAB digital radio at the end of March, but its DAB-only services will now continue online. Previously, the broadcaster announced it would end DAB transmissions and close RTÉ Gold, RTÉ 2XM, RTÉ Radio 1 Extra, RTÉ Pulse, and RTÉjr Radio. But in a U-turn, these stations will survive due to feedback from listeners. RTÉ says its decision to cease DAB transmission was driven by three main factors – the fact that DAB was the least utilised platform in Ireland; that RTÉ is the only Irish broadcaster on the DAB system, and cost avoidance...More >>
radiotoday.ie - 02.03.2021
Simultaneous play of You’ll Never Walk Alone planned
You’ll Never Walk Alone will be played out simultaneously on a number of radio stations this Friday morning. NPO 3FM presenter Sander Hoogendoorn had the idea to bring all radio stations in the Netherlands together during the corona crisis, but now RTE Gold and dozens more across Europe are joining in. It’ll happen at 8.45am in the Netherlands, which will be 7.45am in Ireland. You’ll be able to hear it on Gold Breakfast with Will Leahy on RTÉ Gold, BBC Radio 1 and Radio 2 in the UK, and many more around the mainland...More >>
radiotoday.ie - 19.03.2020
RTÉ to close its DAB digital radio stations in major strategy change
RTÉ is to close its digital radio stations including RTÉ 2XM, RTÉ Pulse, RTÉ Gold, RTÉjr Radio & RTÉ Radio 1 Extra as part of a major revised strategy to address key issues facing the organisation. It says costs will need to be reduced by €60 million over three years (2020-2023), in addition to the reduction of 23% delivered by RTÉ between 2008 and 2018. RTÉ says fees paid to its top contracted on-air presenters will also need to be cut by 15%, in addition to the 30+% cuts as agreed in previous years. Over 200 people will need to leave in 2020...More >>
radiotoday.ie - 07.11.2019