(Votes:4, Average:5)
Please share Your opinion and comments in the Facebook-comment box below the player! If the radio lags, or breaks, please send us a message on the Contact page! If the radio doesn't start at all, try to check the Troubleshooting page to find a solution! 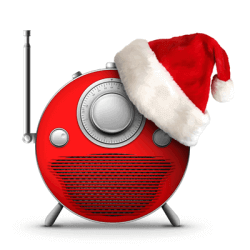 You can choose each station of Christmas FM below the player!

Christmas FM 's slogan: “Bringing You the Magic of Christmas”

E-mail: You can send your e-mail to Christmas FM via the official Christmas FM website directly from here: https://christmasfm.com/snowdays/

SMS: Text messaging to Chrismas FM works only from Ireland, only to subscribers of certain mobile phone networks, and has premium fee because it contains charity donation. For further details, and SMS number, please see the official Christmas FM website here: https://christmasfm.com/about-us/terms-and-conditions/

Classic Hits
Phil Collins - I Wish It Would Rain Down

Highland Radio
The 9 til Noon Show with Greg Hughes

Christmas FM becomes KISSMAS FM for Valentine’s
The team behind Christmas FM has launched a pop-up radio service for Valentine’s Day called KISSMAS FM. Kissmas FM, which launched this morning (Tuesday) is a love song based, pop-up radio station ‘celebrating the world’s greatest feeling’. Ireland’s Valentine’s station will be taking over all Christmas FM digital channels from February 11-14th playing non-stop love songs, letting listeners take time out to focus on the world’s greatest feeling and send out their messages of love...More >>
radiotoday.ie - 11.02.2020
Christmas FM announces winner of its song contest
Santa Claus by Galway based musician Niall Teague has been announced as the winner of the Hard Rock Cafe Christmas FM Song Contest for 2019. Now in its twelfth year, the song contest on the Christmas radio station attracts hundreds of entries each year – all vying to be crowned ‘Best Christmas Song’ by Christmas FM’s listeners. Originally from Belfast, Niall now lives in Galway with his family where he plays in some local groups. Speaking about the song ‘Santa Claus’ winner Niall Teague says: “...More >>
radiotoday.ie - 12.12.2019
Christmas FM returns across the country for 2019 on FM
Annual fund-raising festive radio service Christmas FM is back on-air for 2019. The station, broadcasting from its usual space inside the Ballsbridge Hotel in Dublin, launched at 1pm Thursday afternoon. The station has partnered with Barretstown for this year, as it aims to raise over €250,000, which will go directly towards Barretstown’s mission of rebuilding people’s lives through therapeutic programmes. The primary sponsors of the station are Coca Cola, Cadbury and An Post...More >>
radiotoday.ie - 28.11.2019