(Votes:50, Average:4.6)
If the online broadcast of 98FM doesn't start, or lags, please contact us on the Contact page, or try to find the error on the Troubleshooting page. 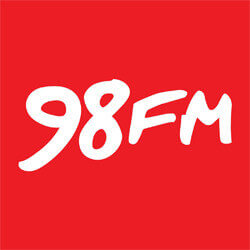 Listen to the online radio of 98FM live, which lauched in 1989 and operates as a commercial radio from its Dublin studios. The station is in the ownership of Bauer Media Audio Ireland.
98FM is a multi award winner radio station with many PPI and IMRO Radio Awards. The radio itself, its programmes and its presenters have been awarded many times in the last fifteen years. The radio won the "Music Station of the Year" award four times - in 2008 and 2013 from PPI, and in 2018 and 2019 from IMRO.
The broadcaster's mission is to maintain the sparkling lifestyle of the capital through the air by its energetic pop music compilation and by its vivacious talk-shows. The playlist channels the hottest-crispiest pop hits along with the last years’ biggest hits while the schedule’s talk-related part keeps up the dynamics with happy talk-shows and easy chit-chats.
The radio launches the Dublin mornings on weekdays with "98FM’s Big Breakfast with Rebecca & Brendan" from 7am to 10am.

The radio's decade oriented sister stations "Throwback", "Dance", "R&B" and "Unwind" are available below the player!

Ireland's Classic Hits
Freddie Mercury & Queen - Living On My Own

Cork's 96FM
Picture This - Get On My Love

John Kilraine appointed as London Correspondent for RTÉ News
After 15 years of being Dublin Correspondent, John Kilraine has been appointed as its new London Correspondent. The former 98FM journalist will be responsible for reporting across RTÉ News’ radio, television and digital platforms on political, social and economic affairs in London and the wider Great Britain...More >>
radiotoday.ie - 13.04.2022
The big winners list for the IMRO Radio Awards 2021
Bauer’s radio stations in Ireland have won a total of 41 awards including 13 Gold across Newstalk, Today FM, 98FM and SPIN. The IMRO awards included Music Station of the Year for SPIN 1038, Current Affairs Programme for The Pat Kenny Show on Newstalk and Entertainment Inserts for Gift Grub on Today FM’s Ian Dempsey Breakfast Show...More >>
radiotoday.ie - 04.10.2021
98FM hires radio presenter Suzanne Kane for mid-mornings
Former Classic Hits 4FM and FM104 presenter Suzanne Kane is joining 98FM as its new mid-morning show host. Suzanne Kane on 98FM promises 90s and noughties dance and RnB anthems and content from comedy and parenting to the best places to eat in Dublin. Listeners can also expect regular features on health, wellbeing and what to watch or stream tonight...More >>
radiotoday.ie - 29.08.2021
Jeremy Dixon joins Classic Hits to produce Breakfast
Former 98FM presenter Jeremy Dixon is joining Ireland's Classic Hits as producer of the Colm and Lucy Breakfast Show. Jeremy previously spent seven years as host of the current affairs show ‘Dublin Talks’ on 98FM, and 17 years prior to that with FM104 on ‘The Phone Show’. Following two IMRO Awards and over 24 years of radio experience, this will be Dixon’s first venture into radio production...More >>
radiotoday.ie - 08.07.2021
98FM’s Brian Maher takes on a Big Run Home
98FM’s Brian Maher will take to Dublin’s Phoenix Park today (Thursday) in a bid to complete a 24Hour Runathon which aims to raise €24,000 for Special Olympics Ireland. Brian – presenter of The Big Ride Home and a big fitness enthusiast is no stranger to undertaking ambitious challenges in aid of Special Olympics Ireland, having run, swam and cycled previously raising over €75,000 for the charity in the process. This morning at 9am, Brian began his...More >>
radiotoday.ie - 21.05.2021
Adrian Kennedy & Jeremy Dixon to leave 98FM
98FM has today announced that its mid-morning phone-in show Dublin Talks has come to an end. Presenters Adrian Kennedy & Jeremy Dixon are to depart the station after seven years. Michael Brett, 98FM Programme Director said: “I’d like to thank Adrian, Jeremy & the dedicated production team for their time at 98FM and their commitment to Dublin Talks. We wish them all the best in their future endeavors.”More >>
radiotoday.ie - 26.04.2021
Wisebuddah updates jingles and themes for 98FM
There’s a new sound on 98FM thanks to an updated jingle package from Wisebuddah in London. The new sound is an evolution of the 2018 branding and reflects recent developments in the station’s format and playlist to incorporate more of the biggest hits through a number of years, along with today’s best music. The package includes a brand-new Top of Hour, fresh Show openers for Dublin Talks and 98FM’s Big Breakfast, and a new News theme, along with a selection of IDs taken from Wisebuddah’s Antenne Bayern 2020 package...More >>
radiotoday.ie - 17.02.2021
Rebecca Shekleton and Brendan O’Loughlin for 98FM breakfast
98FM is putting Rebecca Shekleton and Brendan O’Loughlin its Big Breakfast from March 16th. They replace Cooper and Luke who left last week. Best pals Rebecca and Brendan are two of the creators and hosts of superfan podcast, Shrine of Duty, an homage to the UK Drama Series, Line of Duty. The pair appeared on national television last year, to meet ‘Line of Duty’ star Adrian Dunbar who congratulated them on the success of their podcast...More >>
radiotoday.ie - 04.03.2020
Cooper and Luke disappear from 98FM’s Big Breakfast
Changes are happening at 98FM as Luke O’Faolain, one half of the Cooper and Luke breakfast show, confirms he has left the station. In a social post, Luke says last Friday was his last show and that he is absolutely gutted he didn’t get to say goodbye to listeners on-air. Co-host Steven Cooper was also absent from the show this morning, but he hasn’t posted anything online regarding being off. Evening show “The Fix’ presenter Ciaran O’Connor covered Breakfast this morning...More >>
radiotoday.ie - 02.03.2020