(Votes:62, Average:4.5)
If the online broadcast of Cork's Red FM 104-106 doesn't start, or lags, please contact us on the Contact page, or try to find the error on the Troubleshooting page. 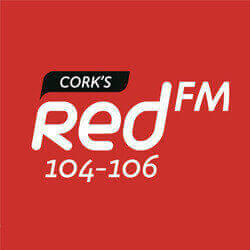 Listen to the online radio of Cork’s Red FM live, which launced in 2002 in its Bishoptown studios. The broadcaster operates as a local commercial radio station with analogue availability in and around County Cork. The station is in the ownership of Siteridge Ltd.
Red FM Cork is the most youthful among the County’s name carrier radios, of course this is no coincidence, because Red FM’s primary target age group is the 15-34 segment, and in this age group, the most listened to radio station in its home county, and also overcomes the heavyweight national radio broadcasters of Ireland.
For building and preserving this outstanding popularity, the broadcaster composes its programme structure in the most dynamic and exciting way. In the radio's mixture, the first and utmost component is the music which is built from the best hottest-crispiest and some older pop-hits. The middle ingredient is the speech in lively mooded talk-shows, easy-funny chit-chats without serious conclusions - but keeping the atmosphere to continue the music playlist. The last additive is in the mixture just because its mandatory for legally operating radios, the hourly arriving news, sports, travel and weather reports are aired at the lowest possible level. As a bonus spice, traditional Irish music is broadcasted on Sunday from 7pm to 10pm in "Green on Red".
The broadcaster energizes the weekday mornings with "Breakfast on Cork's RedFM" led by Rob, Ciara and Laura from 6am to 9am. The radio's schedule brings breakfast show on the weekend too, so on Saturday from 7am to 10am "Saturday Breakfast with Hayley Ryan" sets the dynamics of the weekend.

East Coast FM
Westlife - If I Let You Go

Cork’s RedFM celebrates 21 years of broadcasting
Cork’s RedFM launched on this day in 2002 and promised a fresh, new sound for Cork city and county. Now, at 21 years old, the station is celebrating everything it has done for local listeners and giving away birthday presents throughout the day. The station says: “Our audience has grown up with the radio station as the soundtrack to their lives and a constant companion which has entertained, provoked and informed...More >>
radiotoday.ie - 16.01.2023
Bauer to buy Cork’s RedFM subject to regulatory approval
Bauer Media Audio Ireland has announced that it has entered into an agreement to acquire Cork’s RedFM subject to regulatory approval. If the deal is approved, Bauer says it is committed to ensuring that Red FM continues to grow and develop, providing investment and innovation to create an even better listener experience for the people of Cork, and allowing Red FM to continue providing the music, entertainment and great local news and information that listeners value...More >>
radiotoday.ie - 10.11.2022
Today FM, Cork’s Red FM and WLR win top awards at the IMROs
All the winners from the IMRO Radio Awards 2022 have been announced including the top Station of the Year titles. The Full-Service Station of the Year award went to Today FM, Music Station of the Year was won by Cork’s Red FM, whilst the Local Station of the Year award went to WLR FM...More >>
radiotoday.ie - 07.10.2022
Rob Heffernan joins the breakfast team at Cork’s RedFM
World Champion racewalker and Olympic Bronze Medallist Rob Heffernan is joining Cork’s RedFM for breakfast. The station says Rob will be on-air with breakfast show hosts Laura O’Mahony and Ciara Revins with the usual hit music and big prizes. Speaking on the announcement, Rob said: “I’m delighted to join the team at Cork’s RedFM. This is a whole new challenge for me but...More >>
irishradiolive.com - 16.02.2022
Singer and songwriter Stephanie Rainey joins Cork’s RedFM
Cork singer, songwriter Stephanie Rainey has joined Cork’s RedFM to host a new Sunday show. “Sunday Brunch with Stephanie Rainey” started over the weekend and can be heard every Sunday from 10am till 2pm. Stephanie is known for her ballad Please Don’t Go became an overnight viral hit in 2015. Speaking about her new Sunday morning show Stephanie said:...More >>
radiotoday.ie - 06.02.2022
Radio presenter Kilian Pettit to leave Cork’s RedFM
Kilian Pettit is set to leave Cork’s RedFM after six years with the station. In that time he was promoted to the role of music director in March 2020, and nominated for a number of awards. Kilian tells RadioToday: “Being on air is a thrill but also a great responsibility, especially during these last eighteen months. “Radio is a lifeline for so many, and I’m very proud to have been a friendly voice on the airwaves throughout these turbulent times.”...More >>
radiotoday.ie - 28.08.2021
All 32 applications for BAI scheme granted cash
The BAI has given a total of €2.5m to 32 independent commercial radio stations across the country to share awareness and understanding of COVID-19. The special funding initiative was operated by the BAI under the BAI’s Sound & Vision 4 Scheme, following a request from the Minister for Communications, Climate Action and Environment, Richard Bruton, TD. Funding recommendations range from €40,000 to €95,000. Successful projects include: ...More >>
radiotoday.ie - 03.06.2020
iRadio, Beat and Red FM unite for streamed concert
iRadio, Beat 102-103 and Cork’s Red FM are coming together to present a special streamed concert called Heroes Aid Live to raise funds for frontline workers while also offering company and entertainment to many listeners. The stations recently approached Heroes-Aid about the concert and the charity was delighted with this additional cross station radio support. The event will take place over the May Bank Holiday weekend – from 7pm to 9pm on Sunday May 3rd, audiences will enjoy a music set from a host of contemporary artists including Gavin James, Keywest, John Gibbons, True Tides, Stephanie Rainey, The 2 Johnnies and Moncrieff...More >>
radiotoday.ie - 24.04.2020
JNLR: 81% of the population listen to radio every day
The latest radio listening figures show 81% of the population are tuning in every day, which translates into weekday figures of 3.2 million listeners. More than half tune into their local or regional station and 43% listen to a national station. Among the younger, 15 to 34-year market, 71% listen daily. Gabrielle Cummins, Chairperson of the Choose Radio group says access to radio on smart devices is helping radio stay at the top of its game: “The growth in streaming services has revitalised radio advertising and reiterated its relevance to the listener. Access to radio is now...More >>
radiotoday.ie - 06.02.2020