(Votes:915, Average:4.1)
If the online broadcast of RTÉ Radio 1 doesn't start, or lags, please contact us on the Contact page, or try to find the error on the Troubleshooting page. 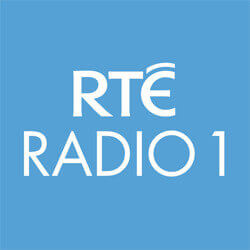 Listen to the online radio of RTÉ Radio 1 live, Ireland’s primary information source which started it’s broadcast almost a century ago, in 1926. Originally launched as "2RN" and it was the first radio service of the Irish Free State. Through the historical times, the station had several names, and finally in 1979 arrived to its current name, which is the abbreviation of the owner Raidió Teilifís Éireann, Ireland’s National Public Service Broadcaster.
RTÉ Radio One has the biggest listenership in Ireland because not just keeps its listeners in line with the latest Ireland news and world news, but also entertains with a nice selection of music, and phone-in talks with the listeners, and naturally the sports news and weather reports diversify the programmes, so all demands are satisfied in one broadcast.
The radio has been broadcasting the "Morning Ireland" since 1984 which is Ireland’s most listened to, and thus the most influential worldview shaping radio programme in the country. "Morning Ireland" is the number one in spreading the knowledge about the current affairs, politics and sports of Ireland and the world on every weekday from 7am to 9am presented by Rachael English, Gavin Jennings, Audrey Carville, Aine Lawlor and Mary Wilson.
The broadcaster has numerous sister stations - 2FM, Lyric FM, Raidió na Gaeltachta, Pulse, 2XM, RTÉjr, Gold, Radio 1 Extra - which all represent the high quality of Raidió Teilifís Éireann, but approach from different angles to the radio broadcasting to satisfy every possible type of listeners with every sphere of interest.

Downtown Country
Chase Rice - Lonely If You Are

Sunshine 106.8
Whitney Houston - I Have Nothing

Spirit Radio
COME WHAT MAY - WE ARE MESSENGERS

Midlands 103
Mental As Anything - Live It Up

RTÉ Raidió na Gaeltachta to air series on The Irish State
The Irish Free State came into being on 6 December 1922, and a new series starting on RTÉ Raidió na Gaeltachta on 15 January will examine how the fledgling state achieved its unique standing on the world stage over the course of the last one hundred years...More >>
radiotoday.ie - 10.01.2023
New North East Correspondent position for RTÉ journalist Laura Hogan
Former Today FM and East Coast FM newsreader Laura Hogan has been appointed as North East Correspondent at RTÉ. Laura has worked as a multimedia journalist in RTÉ since 2018, reporting across television, radio and online news including RTÉ’s Six One News, Nine O’Clock News and Morning Ireland programmes...More >>
radiotoday.ie - 20.12.2022
Louise Duffy announced as replacement for The Ronan Collins Show
Former Today FM presenter Louise Duffy will host a new music show from January on RTÉ Radio 1 in the slot formerly held by The Ronan Collins Show. Louise has recently been heard on RTÉ Radio 1 filling in on Late Date, Rising Time, and The Ronan Collins Show itself, weekdays 12pm till 1pm...More >>
radiotoday.ie - 10.12.2022
RTÉ Radio 1 Folk Awards shortlist announced
RTÉ has announced the shortlist for the RTÉ Radio 1 Folk Awards 2022 with the awards evening planned for Thursday 17th November live on the radio. The awards will feature live performances from some of this year’s nominees, celebrating Irish folk music and artists, both established and emerging...More >>
radiotoday.ie - 03.11.2022
Radio 1 and RTÉ RnaG confirm new five year GAA rights agreement
RTÉ Radio 1 and RTÉ RnaG have retained exclusive national live rights to GAA games in a renewed five-year agreement. RTÉ Sport will provide full coverage of 31 Championship games, Tailteann Cup final, 2 semi-finals and Joe McDonagh Cup final...More >>
radiotoday.ie - 25.10.2022
Philip Boucher-Hayes to replace Damien O’Reilly on RTÉ Radio 1 Countrywide
Philip Boucher-Hayes is the new presenter of Countrywide on RTÉ Radio 1 as Damien O’Reilly leaves the station. Philip has been reporting on and presenting RTÉ Radio 1 programmes since the early 1990s. He is currently the presenter of the climate action series Hot Mess on RTÉ Radio 1 and is heard regularly as Claire Byrne’s replacement on the Today programme...More >>
radiotoday.ie - 19.10.2022
Des Cahill to host weekend sport shows on RTÉ Radio 1
Des Cahill is to host both Saturday Sport and Sunday Sport on RTÉ Radio 1. At the same time he’ll step away from The Sunday Game on TV after fifteen seasons at the helm of RTÉ’s flagship Sunday night GAA programme...More >>
radiotoday.ie - 17.10.2022
RTÉ announces plans for coverage of Budget 2023 on the radio
RTÉ says it will deliver comprehensive coverage of Budget 2023 on Tuesday 27th September with extensive reporting and analysis across radio, online and television. RTÉ Radio 1 coverage of the budget speeches will be broadcast live on a special extended News at One with Bryan Dobson, beginning at 12.45pm until 3.30pm...More >>
radiotoday.ie - 26.09.2022
RTÉ radio stations return to The National Ploughing Championships
RTÉ is attending The National Ploughing Championships once again this year with live coverage planned across Radio 1, 2FM, RnaG and lyric fm. The Ploughing will return to Ratheniska, Co Laois, from Tuesday 20th September to Thursday 22nd September and RTÉ will be there over three full days with an action-packed schedule of live programmes, live musical performances...More >>
radiotoday.ie - 15.09.2022