(Votes:121, Average:4.8)
If the online broadcast of FM104 doesn't start, or lags, please contact us on the Contact page, or try to find the error on the Troubleshooting page. 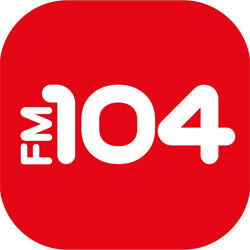 Listen to the online radio of FM104 live, which is a commercial local radio which operates from its Dublin studios, and broadcasts in County Dublin on the analogue way. The broadcast started in 1989 as Capital 104.4FM, and through a relaunch in 1992 got its current name. The radio is in the ownership of the Wireless Group.
FM104 is Dublin’s most listened to local radio station which rolls the hottest pop hits in its general playlist, and also dance, R’n’B, hip-hop and raggae appear in some genre specialist programmes, moreover in the name of remembrance, the 90s and 00s bests are played in decade oriented programmes. As Wireless Group's radio, FM104 is enthusiastic in supporting Irish talents under Wireless Group's "Select Irish" initiative, in which one musician or a band is selected monthly, and gets airtime in some of Wireless network's radios. FM104's supportive posture for the Irish nation goes further in its weekly native Irish-language programme "Deireadh Seachtaine with Sarah Jane Coogan" on Sunday from 9am to 11am.
The commonly music flooded radio service also has talkative programmes throughout the day, happy-youthful talk-shows diverse the programme structure, and bulletins with news, sports, traffic and weather updates of the capital, and national and international news and sports keep up the information supply.
The broadcaster starts the mornings of Dublin with the sweet and invigorating morning show "Strawberry Alarm Clock with Jim-Jim & Nooby" on weekdays from 6am to 10am. On Saturday, the "Weekend Breakfast" from 6am to 9am with great music, chat, fun and games unleash the weekend.

The radio's spinoff sister stations The Hit Mix and The Fit Mix are available below the player, and also the owner Wireless Group's UK sports radio talkSPORT can be selected!

Live 95
One Republic - I Ain't Worried

Christmas FM
Whitney Houston Feat. Pantatonix, Pentatonix - Do You Hear What I Hear

FM104 Drive gets major marketing campaign for Graham and Nathan
A new heavy-weight marketing campaign focusing on 104 Drive with Graham and Nathan has been launched by FM104. It will promote presenters Graham O’Toole and Nathan O’Reilly utilising the ‘We’ll Pick You Up’ tagline and will be seen and heard across Dublin...More >>
radiotoday.ie - 13.10.2022
Graham O’Toole and Nathan O’Reilly resurface on FM104 DRIVE
Former SPIN 1038 Fully Charged presenters Graham and Nathan are back on-air in Dublin on FM104. And they’ve swapped Breakfast for Drivetime with the new 104 DRIVE airing weekdays from 3pm to 7pm. In other changes, Ben Murray will host a new workday show each day from 10am, whilst the Strawberry Alarm Clock will continue each morning with Jim-Jim, Nobby and Crossy...More >>
radiotoday.ie - 23.08.2022
Local radio stations team up with talkSPORT for cricket coverage
talkSPORT in London is teaming up with local radio stations in Ireland to offer coverage of Cricket Ireland’s home fixtures. FM104, Q102, 96FM, C103, Live 95 and LMFM (plus U105 in Belfast) will benefit from the new partnership with sister station talkSPORT to air matches against India, New Zealand and South Africa...More >>
radiotoday.ie - 23.05.2022
98FM hires radio presenter Suzanne Kane for mid-mornings
Former Classic Hits 4FM and FM104 presenter Suzanne Kane is joining 98FM as its new mid-morning show host. Suzanne Kane on 98FM promises 90s and noughties dance and RnB anthems and content from comedy and parenting to the best places to eat in Dublin. Listeners can also expect regular features on health, wellbeing and what to watch or stream tonight...More >>
radiotoday.ie - 29.08.2021
Jeremy Dixon joins Classic Hits to produce Breakfast
Former 98FM presenter Jeremy Dixon is joining Ireland's Classic Hits as producer of the Colm and Lucy Breakfast Show. Jeremy previously spent seven years as host of the current affairs show ‘Dublin Talks’ on 98FM, and 17 years prior to that with FM104 on ‘The Phone Show’. Following two IMRO Awards and over 24 years of radio experience, this will be Dixon’s first venture into radio production...More >>
radiotoday.ie - 08.07.2021
FM104 face backlash for mocking child on-air
‘The Strawberry Alarm Clock’ presenters Jim Jim and Nobby have faced backlash for mocking a four year old child on-air. The child, who has additional needs, sent a voice note to FM104 during a kids-focused feature. When his message was brought to air, the presenters made fun of his voice and delayed speech. Kellie Sweeney, the mother of the child, posted online about her distress at hearing her son being mocked. She mentioned that it has caused her concern “about his self esteem in future because of this carry on.”More >>
radiotoday.ie - 17.06.2021
Bay Broadcasting hires Dave Kelly and Liam Thompson
Bay Broadcasting has hired Dave Kelly and Liam Thompson as Group Programme Consultants. Dave Kelly was Group Programme Director of FM104 and Q102 for almost twenty years, whilst Liam Thompson has been Group Programme Director of Communicorp and PD of Magic London and launch director of Virgin Radio in the UK. Liam also worked as a Consultant for Cork’s 96FM and C103 in 2017. As consultants, they will work with Bay Broadcasting’s Radio Nova and Classic Hits, implementing a joint strategy for the stations to develop the two brands into the future and capitalise on opportunities Bay sees in the Irish radio market currently...More >>
radiotoday.ie - 09.01.2021
A boost for Newstalk in the latest JNLR results
Newstalk is celebrating moving into second place as the nation’s second most listened to radio station in the latest JNLR results. At RTÉ, Morning Ireland, Liveline and Sunday with Miriam have also shown big increases during the pandemic for Radio 1, however, RTÉ 2fm has suffered a loss in weekday listeners including a little at Breakfast year on year. Morning Ireland is the most-listened-to radio programme in the country, increasing listenership by 62,000 (YoY) with 491,000 tuning in each morning. The figures, released today, covers the 12-month period from October 2019 to September 2020 but are missing a quarter of the required data than usual...More >>
radiotoday.ie - 05.11.2020
Jim-Jim and Nobby ban Lady Gaga’s latest hit
Strawberry Alarm Clock hosts Jim-Jim and Nobby have declared that Lady Gaga’s hit ‘Rain On Me’ is banned from FM104 until the weather cleared up a little. The ban comes after listeners voted the song as their favourite summer song over the last decade. “We went from BBQ weather to umbrella weather in a matter of days. We miss sitting out the back sunning ourselves with a bag of cans, we miss the BBQs and we miss the good drying!” said Jim-Jim. Nobby added: “We’ve decided to pull the song from our playlist for a few days to see if it will stop raining. From Thursday morning at 9am until Monday morning at 8am you WON’T hear ‘Rain on Me’ on FM104. If you do hear it, we ask that you whatsapp, Instagram, tweet or facebook us to let us know!”...More >>
radiotoday.ie - 10.07.2020

13:54The Kid Laroi - Without You
Get older playlist